Looking for a Lao Library

Or Laos if you prefer, but the embassy’s page has the nicer sounding and more accurate spelling – as in Lao People’s Democratic Republic, its official name.  It was once the three kingdoms of Lao; Vientiane, the modern capital, was one of the trio.

Unearthing public libraries here, as in much of Southeast Asia, was quite difficult and depended greatly on serendipity.  I couldn’t find a website or any details, and my multiple Google translated emails to the National Library and National University Library went unanswered.  I finally chanced upon an organization based in touristy Luang Prabang, seven hours from Vientiane, where they had opened a branch in 2003 at Wat SokPaLuang.  The group had turned the Vientiane location over to locals and had no contact for them, but since our hotel’s concierge couldn’t reach anyone at the phone number for the (possibly closed for renovation) national institution, we set off for Wat SokPaLuang, a 20 minute taxi ride away.

Unfortunately, at the temple and high school complex, no one knew anything about a library…

…and I was closely followed by some canines that only respected monks, so after a half hour of tempting the rabies gods, I abandoned my quest.

Though disappointed that, like Thailand, I wouldn’t be able to blog about service in the country, I was resigned as we set off for Patuxai Arch in the city center.  Imagine my delight when just before we reached the Arc de Triomphe style war memorial, we stumbled upon…

Conveniently next door to Lycée de Vientiane, its courtyard is full of foliage.  As I walked along the brick path, I caught the sweet scent of frangipanis among the ferns and palms.  The covered entry shades a long bench and keeps shoes and the bike rack dry during the rainy season.

Inside, thankfully, one librarian had enough English to give permission to take photos and assure me this is the only public facility in the region.  She also said that while they don’t have wifi or computers, people can take books home (yay!). 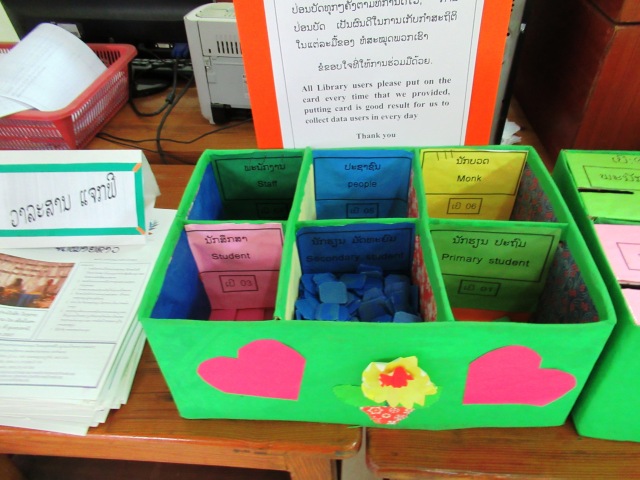 I love where you put your chit as you enter.  Categories include Staff, Monk, and People (so what are staff and monks? 😉 ).

Welcoming employees at the circulation desk

PLVC is one large airy room with a few nooks set aside for specific purposes.  Potted plants are scattered about and subject signs in Lao and English hover above lovely wood stacks and sleek, easy to clean tiles.

By a grandfather clock, a donation box has lots of kip, their currency, and even more dollars and will allow them to expand the collection. 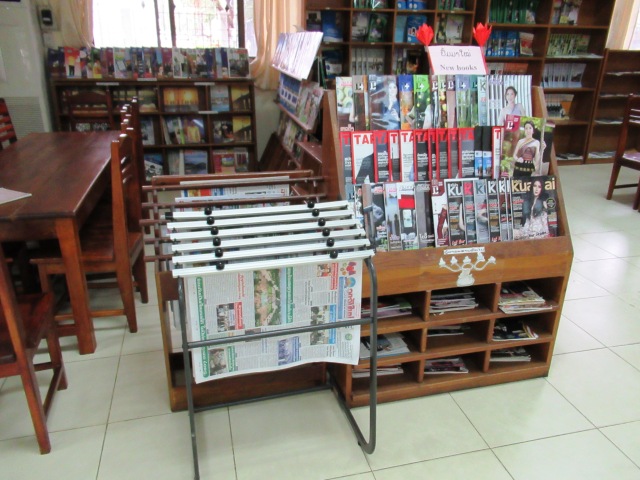 Periodicals on short shelves form a border for a conference area. On the other side of the space, pamphlets and brochures in tall pine cases offer important information to the community. 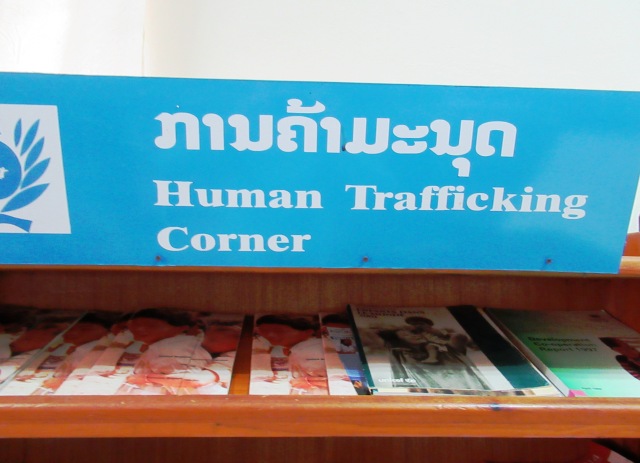 You would think the millions of unexploded land mines left over from nearly 600,000 US bombing missions during the Vietnam War are enough of a burden for any country, but Laotians of both genders who migrate to neighboring Thailand are frequently subjected to sex and/or labor servitude.

In the Children’s section, some of the beautiful mahogany tables are cut into animal shapes.  Plastic chairs are stacked by one that looks like the Twitter logo.  Low magazine racks display paperbacks in Japanese, Chinese, French and English as well as the native tongue.  I was amused to see Contemplating Your Bellybutton, a totally appropriate title considering the preponderance of Buddhists. 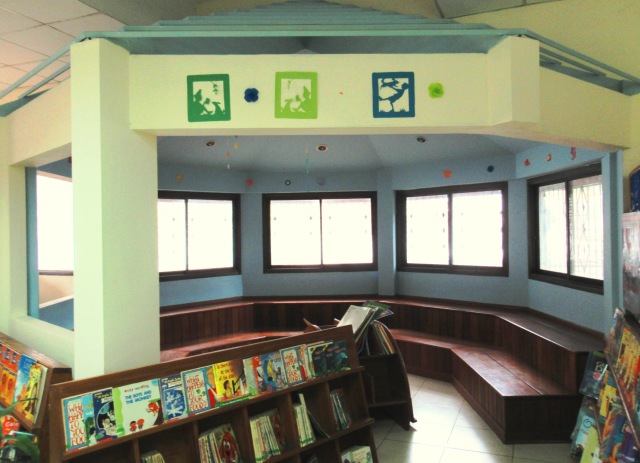 Storytimes are held each day they are open in this wonderful alcove where a gleaming carved teak case holds gigantic picture books. 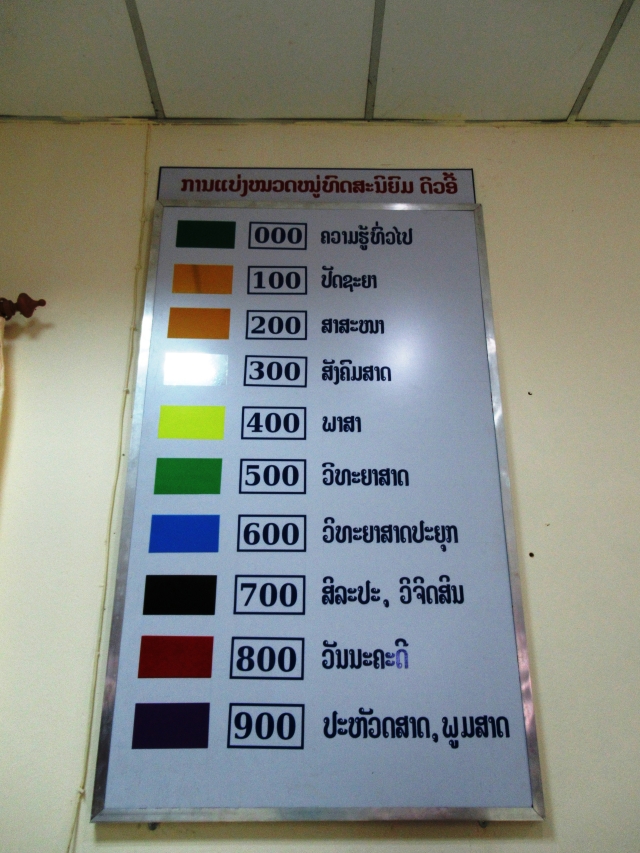 One of the most eye catching Dewey charts I’ve seen

Despite Lao’s abundant natural resources, its infrastructure is sorely lacking.  Fifteen percent of youths don’t get any formal education and a quarter of the population is illiterate, so the library plays a vital role in creating an informed populace that is able to improve their circumstances and protect the land from damaging environmental exploitation.

From the monument, PLVC is just after the crane on the left

2 Responses to Looking for a Lao Library