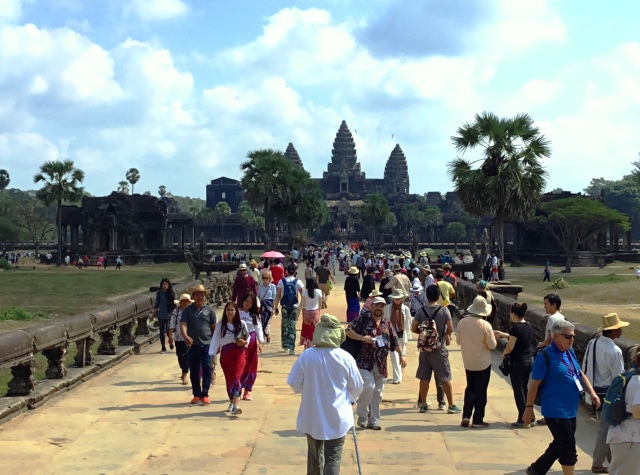 The titular locale of the massive UNESCO World Heritage Site

I tried to find a public library near Siem Reap, Cambodia, but after a lot of searching, the most substantive information seemed to be from the Ecole française d’Extrême-Orient who wrote me that “public libraries are only available…in the capital…”  Luckily, though it’s actually an NGO, the Center for Khmer Studies provides this essential service at Wat Damnak, a temple complex not far from my hotel.

Fits Gabriel García Márquez’s vision of paradise as “…a kind of library.”

In our email exchange, Oum Daraneth, CKS Library‘s (CKSL) Head Librarian, confirmed the lack of institutions and she and Zach Nader from the New York branch graciously allowed me to take photographs.

Set on the gorgeous and blessedly shady (it’s very hot and humid here) grounds of a Buddhist monastery and spread over several buildings, CKSL has more than 20,000 items.  The wide gravel path leading to the facility is bordered by scooters and motorbikes, Bermuda grass and fragrant frangipani trees.  A short wooden stairway outside is littered with pairs of shoes which are removed before entering. 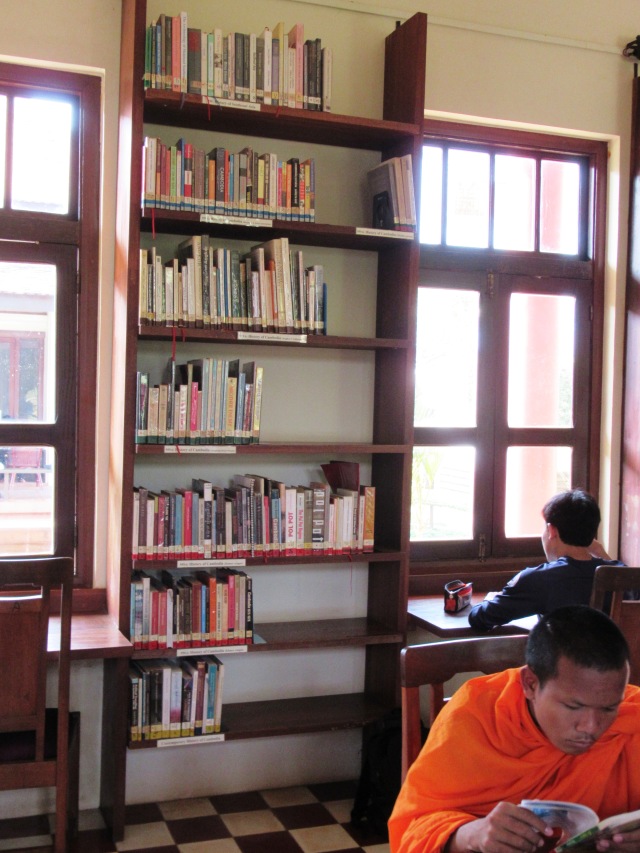 Though only closed on Sunday, it’s always busy and well used by a diverse population from erudite researchers to elementary school age.  The collection has Khmer, English, and French items, out of print periodicals and tomes, plus dissertations and theses from CKS fellows and Cambodians studying abroad.

Doors are wide open to catch every breeze and cats wander in and out. 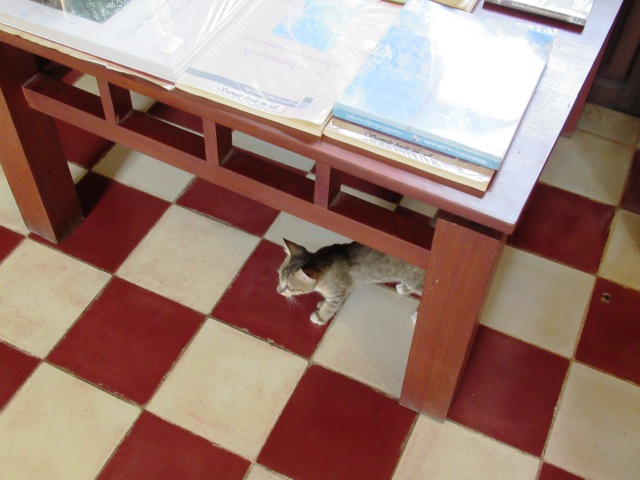 Founded by an international consortium of universities, organizations, individuals and scholars, CKS started gathering materials on the country and region’s history and opened, free of charge to all, in 2001. 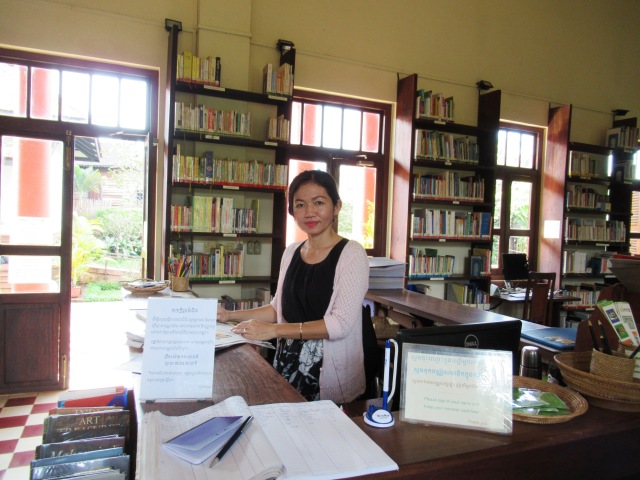 At the desk I met Sivleng (first names come last here), the other CKS trained Cambodian employee.  Her English was excellent and she was so hospitable and friendly as she gave me a tour.  She and Daraneth manage the collection with an assistant.

In the Reading Room, an elegant donation box on spindly leg stands by a huge nature themed mural covering one wall.  A surface contains a mini booksale and long two sided tables conveniently sport electrical plugs and a row of double reading lamps.

As well as books, the library offers maps, daily newspapers, internet access, free wifi and DVDs and CDs about the society and culture.  Daraneth wrote me that anyone can come and browse, but only those with member cards can take things outside to read on the terrace.

Shrine to some of those who made this place possible

Since there is an academic intent, CKSL has JSTOR access for Senior Fellows and is the first in Southeast Asia to be elected a member of the Council of American Overseas Research Centers.  A joint ILL agreement with the resource development library in Phnom Penh increases the scope of what’s available and CKS is looking for additional complementary partnerships. 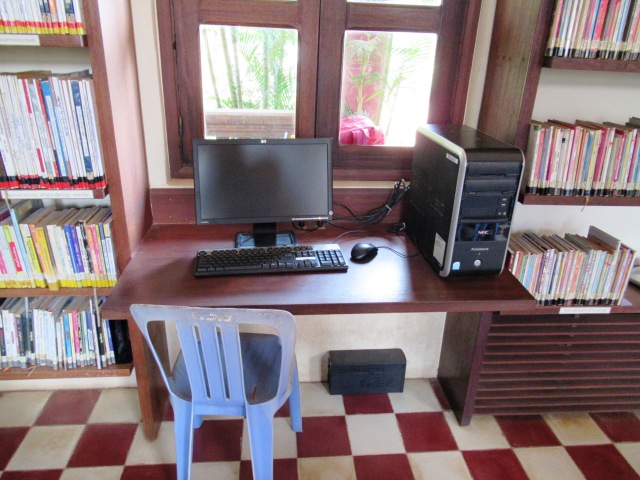 One of three public PCs

The history of the Khmer Rouge is loaded on five tablets from Bophana.

CKS is an important resource for Cambodians interested in both past and future.  Its journal, In Focus, publishes scholarly articles and they host a number of programs that will benefit the people and nation as they modernize.  The Siem Reap location is the headquarters so adults can go to talks, films and documentaries in a red and white conference hall on the premises.

When the Center hosted a private screening of First, They Killed My Father, the ensuing discussion was led by producer Rithy Panh while in the library, casualties of the Khmer Rouge discussed their horrid ordeals with director, producer and writer, Angelina Jolie.

CKSL promotes librarianship and has held professionally taught workshops attended by librarians from all over the land. Even the legendary Nancy Pearl came to speak about reading advocacy.  And CKS believes in continuing education: Daraneth spent time at the University of Wisconsin, Madison, training on WorldCat and helping correct entries and romanize Khmer.  She has also learned about metadata, conservation and other elements of bibliographic systems at Cornell. 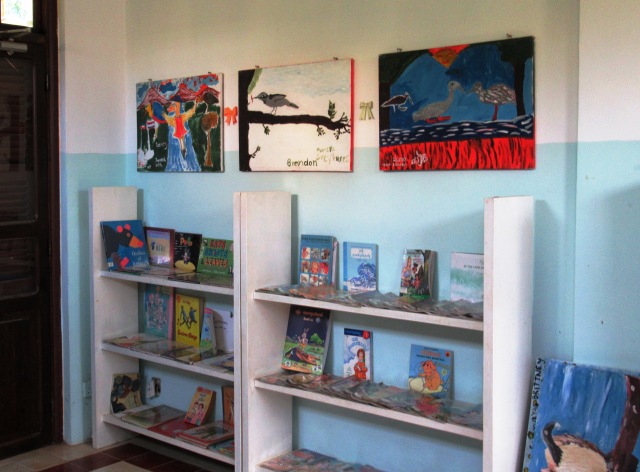 The library has a lovely little children’s section to “encourage them to read, both English and Khmer.”  Sometimes a volunteer will tell stories or give an art session and they invite kids from the primary school next door as Daraneth aids in translation.

…and some teaching proficiency in two languages.  CKS’s librarians also give users courses on library use and welcome visitors.

Colorful mobiles dangle from the ceiling and cheerful artwork decks the walls.  Youngsters can plop on pads and mats keep their clothes clean. 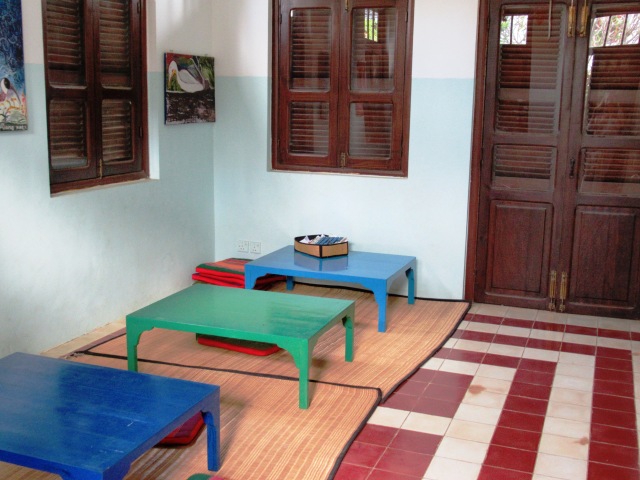 As we head across the lawn to the second building, I notice a wheelchair ramp, still unusual in this part of the globe.

CKSL quickly outgrew its original premises, and thanks to the generous Board of Trustees, in 2010, their Royal Patron, Norodom Sihamoni, King of Cambodia, inaugurated the newly constructed annex where fragile texts are preserved under dust screens on aerated shelves protected from damaging sunlight.  On this festive day, His Majesty also presented CKS with unique archival records from the reign of his father, King Sihanouk, an excellent Khmer dictionary and a munificent financial contribution.

The Nancy N. Lassalle Librarians’ Office, named for a vital donor who provides most of the annual funding, shares space with ancient volumes of Indochina history and antique issues of The Mekong Times and Le Figaro.

Large cases have thin, oversize drawers holding precious old maps and a sign wisely requests books be left on the cart (instead of misplaced in the stacks 😉 ).

At the far end of the structure, I mounted steep steps to the catwalk for an impressive view.

As in Gulf of!

Many residents just come here to relax as the tree strewn campus is an oasis from the heat, and nowhere more so than on the library’s verandas.  Next to potted ferns, students curl up in wicker chairs by inset ledges, which, along with a bench on the outer side serve as al fresco desks.  Sitting cross legged on the cool tiles, gaze at the water below as you reflect on what you’ve learned.

What a wonderful setting for a library that is desperately needed and an obvious asset to this famous metropolis.  How astute of the Center to identify and champion the one establishment that can make the greatest difference.  With CKS and CKSL’s help, I believe the future will bring substantially expanded public service to Cambodia.