Lisbon is a splendid city.  Set on seven cobbled hills, seemingly surrounded by water, there are miradores (viewpoints) everywhere.  Any road down from its heights leads to magnificent praças (plazas) and then quickly to the shore.

Since I don’t know any Portuguese, I wrote in advance to a number of the city’s public libraries about visiting and received an enthusiastic and proud response from Biblioteca São Lázaro (BSL), the oldest in Lisbon.  Now one of 17 locations in the metropolis, BSL is integrated with Bibliotecas Municipais de Lisboa (BLX), but was originally used by the (conveniently located) school next door and in 1883 became the capital’s first central library.

Beyond the yellow stucco facade and security gates lies an old fashioned tiled hallway with high cupboards and portraits on the walls.  Natural light steams in through transom openings and pale green disks hanging from above provide additional illumination.  At the far end, a cart loaded with dictionaries and a table of language learning materials can be borrowed by the sizable immigrant population, many Chinese or Bangladeshi, here.

If staff are busy, browse movies and books while you wait

Across from checkout, items on tall shelves stand with covers facing out and low white metal racks have movies.  Beneath a bulletin board another cart boasts mouthwatering cookbooks.

Painted a cheery blue and white, with gleaming dark wood floors, the first room on the left leads to the juvenile area and at the tidy Children’s station users can find out about available terminals.  I catch the sound of tots playing and a fresh scent from the tree outside breezing in through the oversize windows. 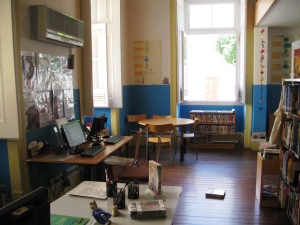 Public computers just inside the entrance

It’s a hopping place.  Though not well funded, (most materials are a couple of years old and with just three staffers they must close on Sundays and for lunch on Mondays when just one person is working and for weekends in summer to get some vacation time in) they manage to serve this multiethnic neighborhood, striving to meet its specific needs, not least of which are the students in the adjacent facility with whom they work intensively.  In fact, when the neoclassical building was reopened in 2006 on the first day of school after being shuttered for a six year renovation, the cultural councilman emphasized the significance of the date and spoke of the importance of connections between libraries and the educational institutions in their areas.

Not realizing that the BSL director, Rui Faustino, was there, I just met two employees when I visited and luckily both of them spoke very good English, though there is still a language barrier, so any mistakes in translation are my fault of course. 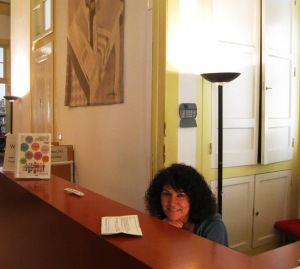 Joaquina at the main desk

Joaquina, the reference librarian, was quite busy with patrons, but in between helping them was happy to answer my many questions.  BSL is supervised by Junte de Freguesia de Arroio, a smaller department, and will soon offer programs for older folks.  Totally free for any resident, they are barcoded, have wifi and eight public computers, French and English titles, ILL, music and a few audiobooks.  You can place holds and borrow up to five books and two DVDs.  Everything but the newest magazines go out for 15 days and there are no fines – you just can’t take anything out until you return your overdues. 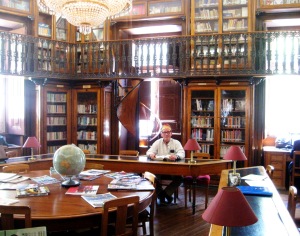 But the best part of BSL is this six sided chamber appropriately outfitted with a hexagonal arrangement of tables.  Totally encircled, an inner table with a globe and an assortment of periodicals is lit by the luxurious quartz chandelier.   Maroon shaded lamps complement the glowing burled paneling and glass fronted cabinets protect Memórias de outras infâncias (Memories of other childhoods) an assemblage for researchers of more than 8,000 books published between 1900-1979 for Portuguese youngsters.

A piece of curved ridged wood mirrors the twist of the winding staircase leading up to the second story where an elaborate brass railing is all that stops you from flying off the path circumnavigating the space. 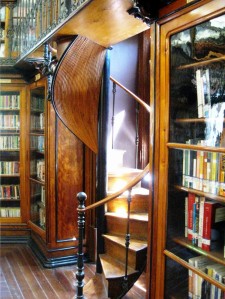 Spiral your way up through the sunbeam…

In another, less opulent, room people were using the computers and perusing fiction.  While a number of homeless locals spend their days here, the São Lázaro district is slowly gentrifying.

Though they advertise events in the local papers, BSL has their own Facebook page, which they think could be another very good way for them to communicate with their audience.

Back out in the hall, I found a case of archaic library tools including an inkwell and quill pen.

Display from a forgotten era

That evening BSL was having a free astrology course for adults and each week in April and May a foundation put on a lecture series on topics such as infertility, osteoporosis, creating a CV, domestic violence etc.  Through BLX people can attend theater, writing and sewing workshops, parenting groups, musical events and family singalongs.  The system houses collections of ancient texts and digitized newspapers, and has exhibitions, yoga and meditation for young ones and classes on developing mobile apps, creating stories with your tablet, finding a job…

Rather than Dewey, they use the Universal Decimal Classification (called CDU here)

The library has items for teenagers, comic books, a wheelchair ramp and the Sala de Apoio support room with moveable storage.

I also got to speak to João about what’s required to work here.  As librarians, both he and Joaquina have university degrees and their director has the Portuguese equivalent of an MLS.  Support workers must get library certificates.  Before starting at BSL, João studied social animation and worked with a children’s shelter so he’s in charge of the almost daily storytimes.

Youth librarian João in his domain

The BSL employees are real go-getters and take any opportunity to supplement the meager budget.  Two weeks ago they increased their holdings by 2000 when they raided a branch that was closing for construction and they’ll rent out the building for a contributed book.  They’re really excited about the 5000 euro for new materials coming this year since many of their acquisitions come from donated volumes.

Children’s is decorated with a candy themed mobile featuring popsicles and bonbons and colorful kid’s artwork.  Squishy round lavender, teal and peach hassocks provide seating for parents and their offspring as does a triback upholstered bench. On a big foam mat in primary colors great for youngsters using the blocks and games on a nearby shelf, a happy duck and her duckling splash in a pond.

Book bags and board games

There are lots of toys and on a two tiered table, sunbursts lure the eye to a selection of picture books.  Small cushioned poofs stacked in a corner by the chapter books provide additional seating and shelf tops sport suggestions.

Drawings from talented adolescents, notably a lovely one of a woman in traditional dress playing a mandolin, paper a side of the flight of steps leading up to a mezzanine with nonfiction stacks, encyclopedia sets and an array of titles on Portugal.  This spacious spot has plenty of snazzy modern seating for students and customers reading beneath the heavy beams shoring up the stunning slatted cathedral ceiling.

With its dedicated staff and mix of contemporary and bygone fixtures and furnishings, BSL exemplifies both the friendliness of the citizens and the breathtaking old world style any traveler will find in Lisbon.  This treasure is truly a boon to the community.